Fur an auld wumman she was probably the biggest Celtic supporter you would ever meet in your life. Her name was Marcella, but was known affectionately as Cella. I was proud to call her “Grannie”.

Parkhead Glasgow was my second home apart from Castlemilk, as my brother and I would stay every other weekend regardless of whether the hoops played at home.

For home games, it was her flat at 164 Helenvale Street where a crowd of us would visit before and after the match; such was her popularity.

At 4:45pm on a Saturday, just as the Pope’s a catholic, the chip pan would be on lard not yet melted, tatties peeled.  Fresh homemade chip butties for all was common.  This not only filled you up but gave the crowds a chance to disperse before all heading home safely. 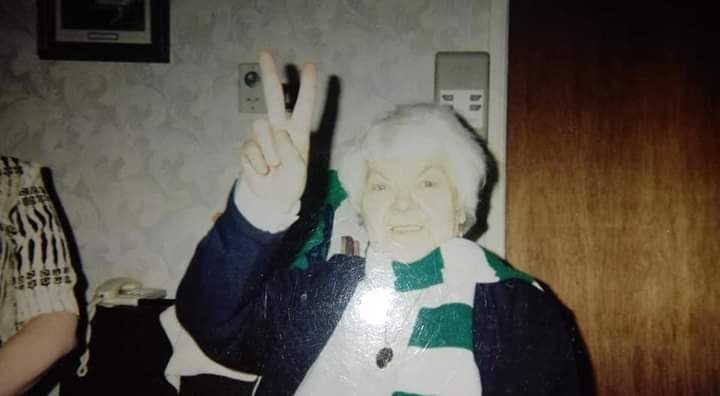 The view from 11 floors up you could see down both the length of London Road and Springfield Road viewing the crowds as matchstick men with the floodlights of Paradise glistening to the right.

My Grannie was a shrewd Business Woman (having worked all her days as a Dinner Lady, Clippy to Bingo caller). Being a War Widow as my Grandad was killed in WW2 there was no option, she never remarried.

When she eventually retired, the landing cleaning business began. The boss and her wee apprentice cleaning the landings for 10 out of the 14 floors in the building.

Along with a Saturday Syndicate for the horses with her flat buddies I learn to write out a bookies slip.

We often liked a “wee refreshment” and would be often found in the Oak Bar (AKA The Clansman or Jimmy’s) most Thursday for a whiskey; and a half shandy.
Whilst having a sing song with the other locals and reminiscing about the past, Cella often kicking things off with “I don’t know why I love you but I do” by Bobby Vinton, such was her devotion to my Grandad Josie. At the end of the night “I was never drunk Angela just tired”. Aye right!

The Celtic Football Social Club was always a highlight of her social calendar. When Tommy Burns won the Scottish Cup in 1995 (the only cup he won as Celtic manager) was another one until the photo was developed and the trophy appeared to be half way up her nose.  She was 81.

Marcella and I had a unique bond, beyond that of maternal granddaughter and grandmother. We shared secrets and memories, more than I did with my own Mum. She forgave me for chopping my long blonde hair to a Casual wedge when I was 14 when all she said was go for a trim. “Suits ye hen” she said after around 20 minutes stunned silence ……