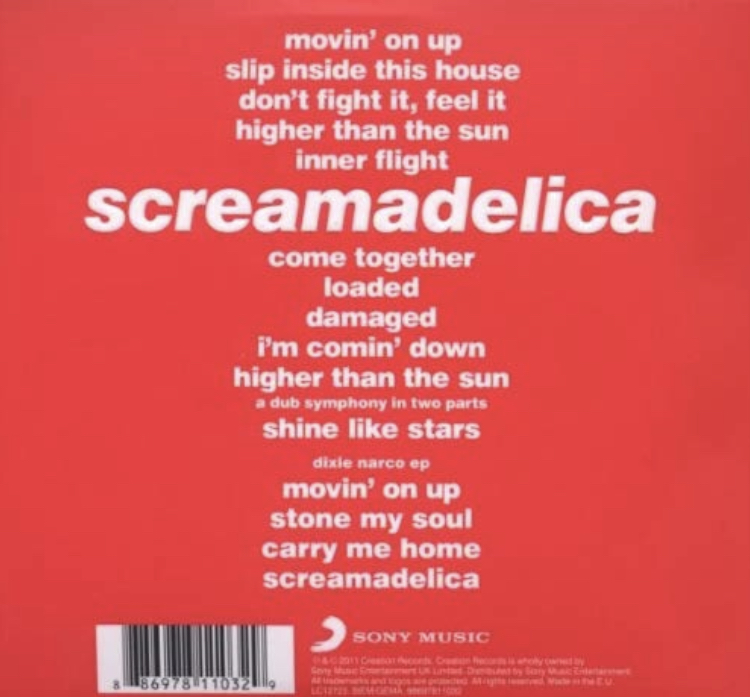 Staying with our music and terrace section. Holywell Street pays tribute to another band and classic album.

The album is important in many ways to our crowd.  Released in September 1991 at perhaps the peak of the club-scene, it is safe to say if Andy Weatherall had not stepped in, it would never have become the album of the club-scene generation.  It had an influence for a young dance crowd, and much like Oasis getting them looking at bands again as well as the club scene dance beats.

Drawing  inspiration from the house music and the acid house scene (and associated drugs such as LSD and MDMA) which was blossoming at the time of its production. The band enlisted house DJs Andy Weatherall and Terry Farley on producing duties, although the album also contains a wide range of other influences including gospel and dub.

Weatherall was, naturally, on the bus when Primal Scream toured Screamadelica, as much part of the Scream gang as any musician or dealer.

‘We wanna be free to do what we wanna do/…And we wanna get loaded.”

It is important also for us as the band have a good sense of politics; the working class and of course follow Celtic. I met Bobby Gillespie in London in the early 90’s, he embraced the club scene himself and you would see him in the middle of a dance floor even at the height of the bands success.  I also met him properly when he was spinning some tunes at Heavenly Social around 1996, in London. He was playing a Northern Soul set and I managed to get a decent chat with him on music, Celtic, Tommy Burns and politics. He pointed out Fergus McCann and his naming of Celtic fans as ‘customers’ instead of supporters.

By far one of the best tracks on the album, it is a proper anthem, Gillespie’s reedy voice suits the track perfectly. This was also a track that they told Weatherall to, ‘just wreck it’ and although Weatherall has probably as much to do with the album as any of the band, it is our opinion that Terry Farley gives us the best mixed version. ‘Loaded’ had precedent much like ‘Fools’ Gold’ but it’s main status was set after what came next, Primal Scream wasn’t the only indie band to find themselves in a new groove, and the summer of 1990 produced dance tracks from The Farm, The Soup Dragons and The Beloved to name a few.

Personally, I held back from getting to like the band and album, it was that pre-football scene and although there was overlaps with dance music linked to the terrace culture, I didn’t want to take to a rock/psychedelic front-man looking like a modern day Mick Jagger. I suppose listening to Loaded and Come Together more often certainly changed my view on things this was the start of getting lost in music more than ever before.

“Loaded”, “Movin’ On Up”, “Don’t Fight It, Feel It” are still immense dance-rock singles and Screamadelica is one of alternative music’s greatest discoveries. Dance music threw open doors for the indie scene and they took full advantage.

Gillespie and Innes were out in Paris hanging out with Kate Moss and Helena Christensen in 1995, the two models asked them to go to a party the following evening the reply was, “sorry hen we’re gonnae see the Celts”

We have this album framed on the wall at Holywell Street Towers.